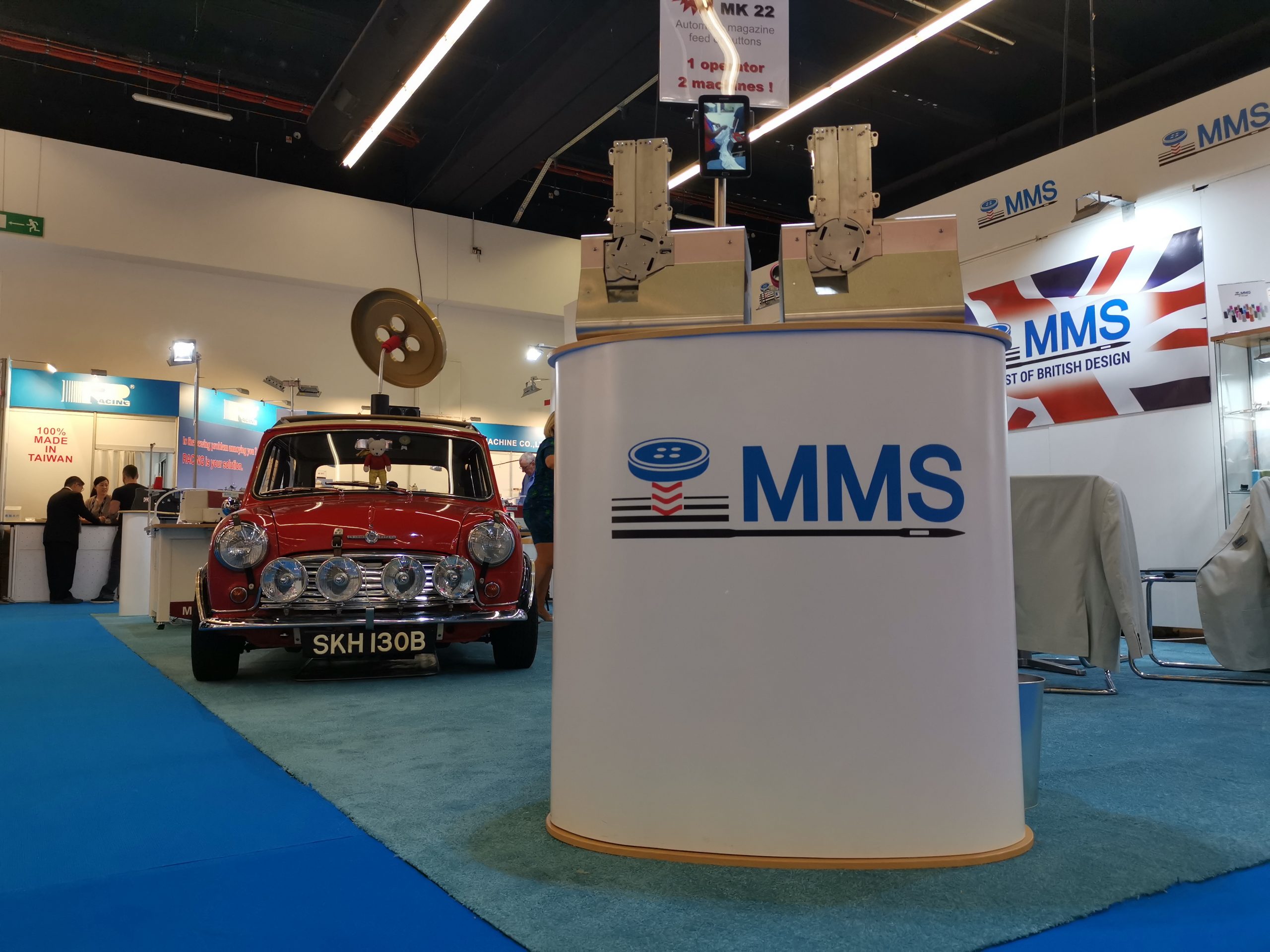 With the new machines packed the MMS team set off from Leeds to Frankfurt for the 2019 Texprocess exhibition. Along with the lorry full of machines we hopefully set off in the 1964 mini cooper which again was to form the centre piece of the exhibition stand. Remarkably the trip went without incident although the clutch was almost non-existent on arrival after some back street starting and stopping.

At the show we exhibited the new MK 18 ECO which is the latest version of the proven Mk 18. With an eye on the environment and also running cost the Mk 18 has been fine tuned to reduce waste to a remarkable 8mm per button. In terms of efficiency this means that 1,000+ extra buttons can be wrapped from the standard sized cone of thread. Along with the thread saving power and air consumption have been reduced as has cycle time meaning that this machine is the most cost effective of its type to use.

Since wrapping buttons on shirts is becoming the norm and each shirt has many buttons a new level of automation is required in order to make the wrapping process cost not prohibitive on regular priced shirts. Wrapping buttons one or two at a time is obviously not ideal therefore a new automatic feeding machine has been developed by MMS. This machine is the MK 22. Unlike any other machine the sewn buttons can be loaded into a magazine which are then automatically fed through the machine where perfect operator free wrapping takes place on a continual basis. These Mk 22 machines were shown on the exhibition stand working in tandem. The operator simply feeds the shirts into each machine on a continuous basis and since it is not necessary to wait for the button to be wrapped before taking this out and loading the next the output per operator doubles over a conventional single operator / single machine set up. Of course another significant advantage of the Mk 22 is that there is no actual operator leading each button to the wrapping position and therefore quality is not determined by the level of training and competence. on the Mk 22 after a few minutes of training anyone can load the magazine and the wrapping quality is then absolutely consistent.

These two machines did not fail to impress both existing and new customers who visited the MMS stand. Although we would have liked to think that they were the stars of the stand the Mini probably again stole the show with many people wanting to purchase it there and then!

(PS the mini did not let us down on the trip back but now is awaiting a new clutch).

Thank you to everyone who visited us.