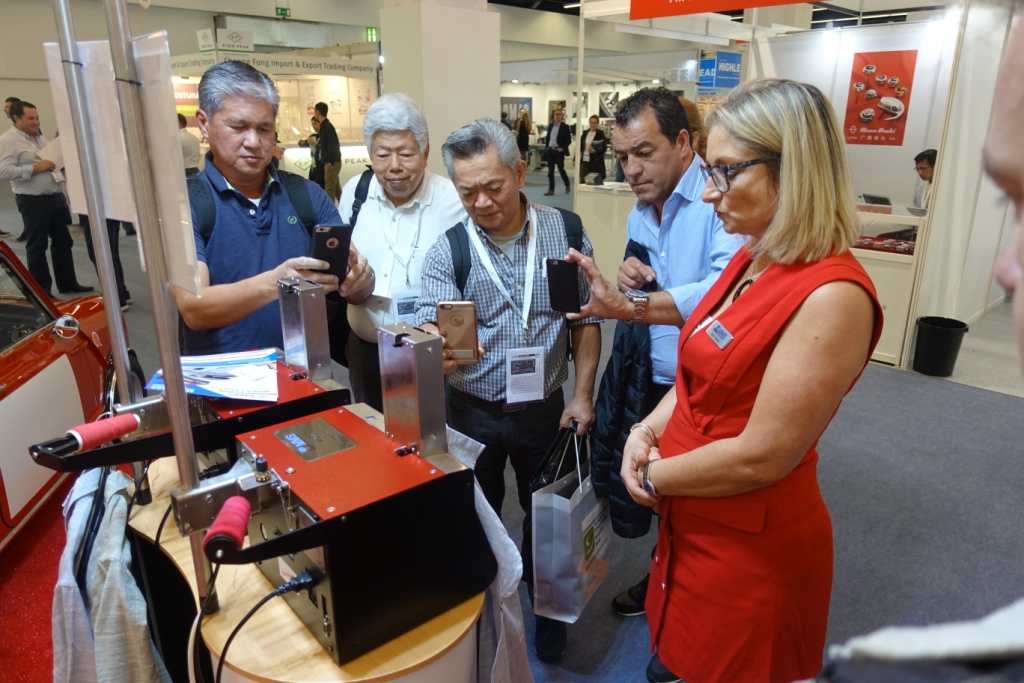 Centre stage of the MMS UK exhibition stand at Frankfurt Texprocess was a shiny red 1964 Mini Cooper S which we drove from the UK along with a van full of button wrapping machines. The Mini is of course an impressive piece of design and we were taking a risk having such an icon on the stand in case the machines paled into insignificance. This was a calculated risk however as this show was the first time our latest MK 22 had been shown anywhere in the world. The MK 22 is the first fully automatic magazine fed button wrapping machine and is the latest machine to come from the development department of MMS UK. We need not have worried as each and every person to view the machine at the show expressed the same view that this was a revolution in the button securing world since every previous machine had to have each button loaded manually. The two MK 22 machines drew large enthusiastic  crowds eager to see them running without an operator present. By the end of the show it was a close call as to whether it was the Mini or Mk 22 that had been photographed more!

Alongside the MK 22 we exhibited our MMS TF button wrapping thread which continues to be a hugely attractive option for all MMS machines around the world due to the high quality and low price. Of course the highly regarded MK 18 was also displayed on the stand along with the semi automatic MK 6. Hung on the walls were the MK 10 and MK 11 machines which are fondly remembered by many as being quality machines from the MMS factory from years gone by.

Thank you to all for visiting us and we hope to see you soon.

PS. the Mini made it back to Leeds with just a blown wiper motor.